When I was growing up, I fantasized about being a spy. I loved all of the television programs featuring sexy secret agents and international intrigue. On my trip to Washington D.C. earlier this month, my first visit was to the International Spy Museum to learn more about the undercover world of espionage. 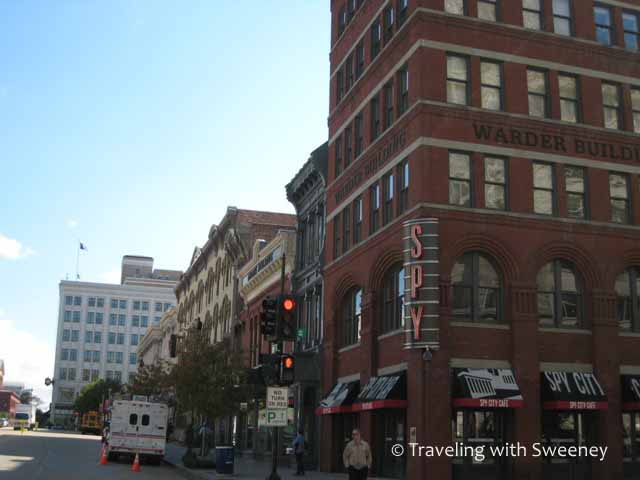 I was surprised and impressed by the extensive number of exhibits, interactive displays and in-depth historical information about espionage, the world’s “second oldest profession”. Artifacts are on display representing the cloak, dagger, concealment, shadow and escape techniques and tools used by the KGB, CIA, OSS and other agencies. Many of them seem as though they came straight from the movies: lipstick pistol, lighter gun, tear gas pen, sleeve dagger, disguise kit, and wristwatch microphone. Open duct work is a big attraction for kids who are able to crawl through from one end to the other much like secret agents who might be escaping or spying on those below.

The history of espionage is covered including the use of spies in ancient civilizations, letter tampering in the European courts during the 1700s, George Washington’s letter with instructions to set up a spy network during the American Revolution, the sisterhood of spies during the Civil War, and Cold War subterfuge. A movie and other exhibits focus on the challenges of intelligence professionals in the 21st century such as cyber attacks.

OPERATION SPY offers visitors a chance to take part in a hands-on, interactive simulation of an intelligence mission. Although I didn’t participate in the experience at the museum, I went about the rest of my Washington sightseeing keeping a watchful eye for likely dead drops (hiding places in public areas) or lethal weapons concealed in everyday objects. A man waiting to cross the street aroused my suspicion.

My next stop was the Dupont Circle neighborhood, an easy Metro ride north of downtown. Arriving at the Dupont Circle Metro Station, I tried not to blow my cover by showing any fear of the extremely steep, 188 ft. long escalator to street level at the northern entrance. A good spy would never be afraid of heights, of course. 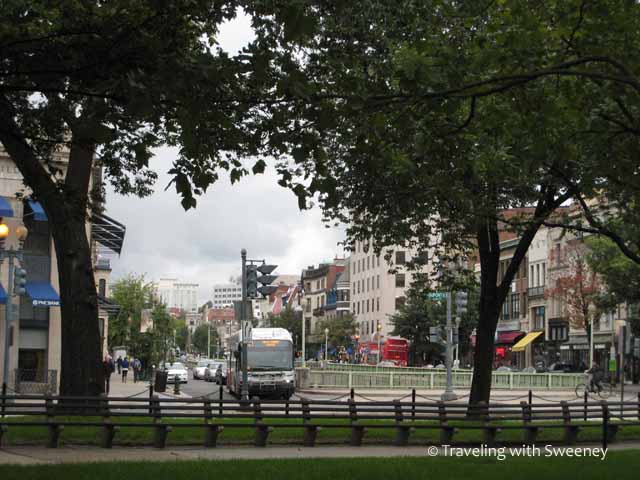 Dupont Circle is a busy residential area with many restaurants, shops and galleries where Massachusetts, New Hampshire and Connecticut Avenues converge. I took a walk through the neighborhood past several foreign embassies located on Embassy Row on Massachusetts Avenue and on other streets off of the circle. Were passersby diplomats or foreign spies? In case they were captured, did their eyeglasses have embedded cyanide pills like ones I saw at the museum?

Dumbarton Bridge between Dupont Circle and Georgetown neighborhoods was built in 1914 and is on the National Register of Historic Places. It’s noted for the four buffalo sculptures by Alexander Phimister Proctor on the ends of the bridge. If only this buffalo could talk. What acts of espionage has he witnessed?

Opting to walk south back to downtown D.C., I came upon Farragut Square where I couldn’t resist the Banana Cream Tart (with chocolate lining the shell) and freshly-brewed coffee at Firehook Bakery. It was a great place for people watching and wondering who were the politicians, lobbyists, diplomats, office workers or maybe even spies.

Since 1925, the Mayflower Hotel has been host to famous guests and the scene of high profile meetings, social events, inaugural balls, and political scandals. An Esquire Magazine article about the bar at the Mayflower includes the mention that “Here, spies have spied on spies.” 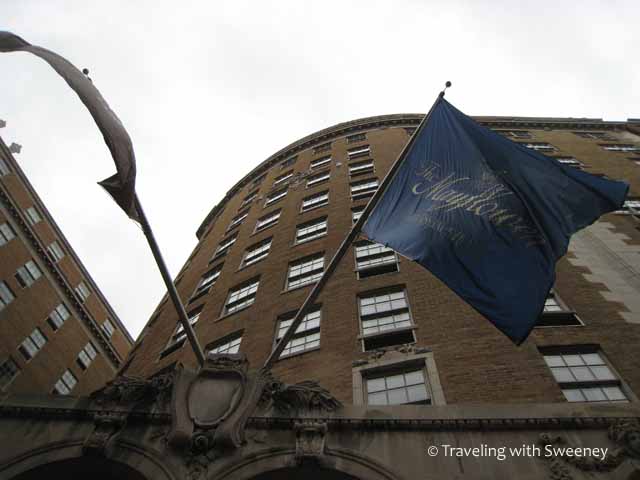 One of the most well-known addresses in the world is 1600 Pennsylvania Avenue. The street is closed to traffic in front of the White House and there is plenty of security, visible and out of sight. 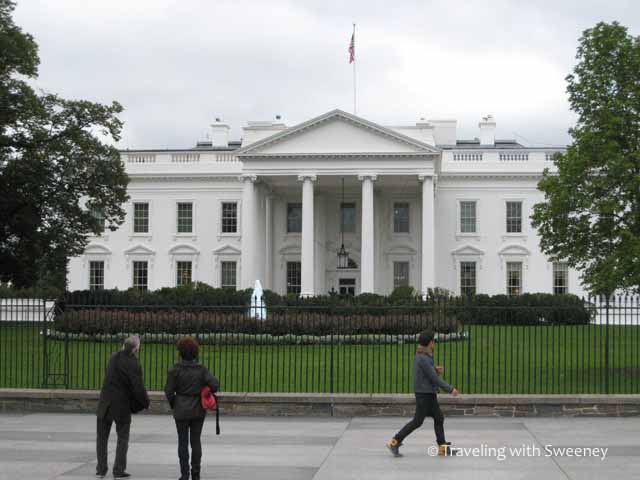 Tourists take photos where anti-nuclear protestor, Concepcion Picciotto, has been standing vigil with her signs across the street from the White House since 1981. Who has she seen enter this house or lurk nearby under cover of darkness? 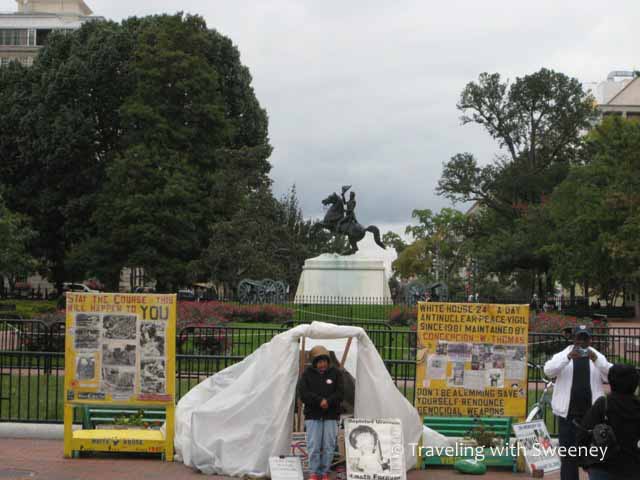 The J. Edgar Hoover FBI Building is not an attractive building, but it’s certainly an imposing one with plenty of secrets inside. The FBI is in the business of breaking up spy networks in the United States and in at least one case they arrested one of their own. In 2002, FBI agent Robert Hanssen was sentenced to life in prison without parole for spying for the Soviet Union and Russia. 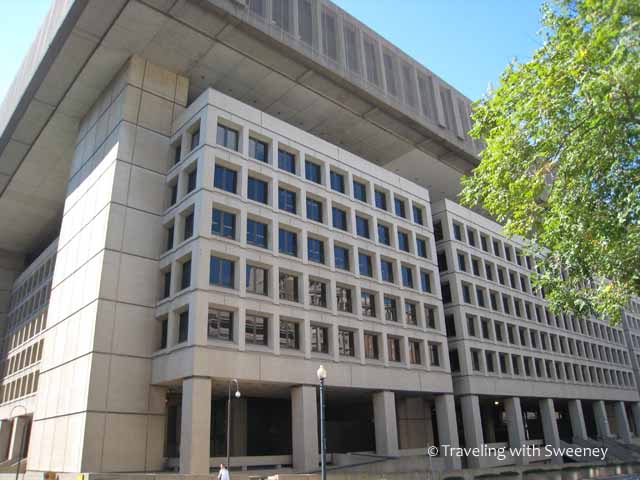 On the premises of the National Gallery of Art at 4th and Constitution Avenue NW is this fountain which in the winter serves as an ice skating rink. I can easily imagine document or microdot transfers on the benches surrounding the fountain or the passing of information by spies disguised as leisurely skaters. 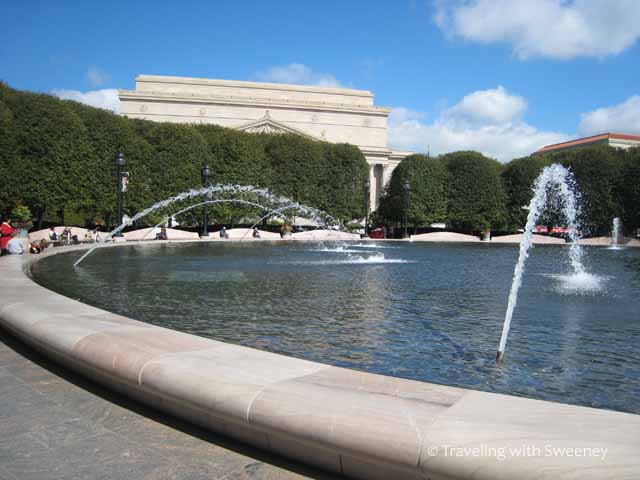 Fountain at National Gallery of Art

What about these suspicious-looking characters? What secret conversation are they having? They are actually part of a sculpture at the Hirshhorn Museum entitled Last Conversation Piece by Spanish sculptor Juan Muñoz. (There will be more about the National Gallery of Art and the Hirshhorn Museum in an article coming soon. I previously posted photos from one of Olafur Eliasson’s installations at the museum called Round Rainbow.) 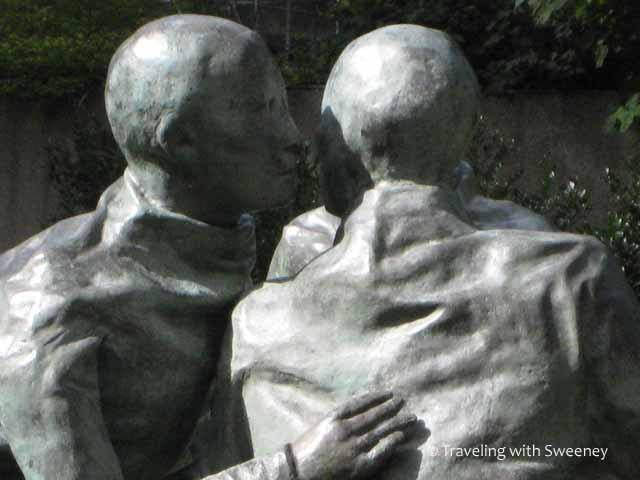 The historic Willard Hotel at 1401 Pennsylvania Avenue has been one of Washington’s most prestigious hotels for over 150 years. Photos of famous guests and diners, including many presidents, fill the walls of the Occidental Grill and Seafood restaurant. I got the feeling that the intimate booths would be quite conducive to intelligence-gathering. A bit of spy trivia: Antonia Ford, a confederate spy and one of the Civil War’s “sisterhood of spies” was married to Major Joseph C. Willard, a co-owner of the hotel during the 19th century. 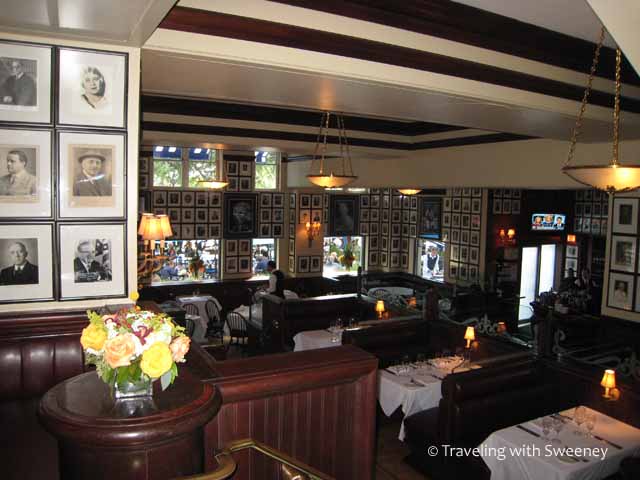 Washington’s Beaux-Arts style Union Station was designed in 1903 by renowned architect, Daniel H. Burnham and opened in 1907. In the 1980s it underwent a $160 million restoration, reopening in 1988. 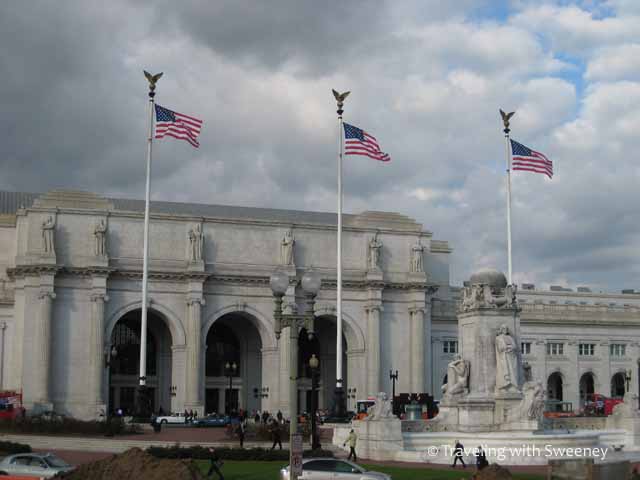 It’s here that I ended my undercover mission and made my “escape” from Washington D.C. on an Amtrak train to Baltimore, Maryland. But that’s another story. 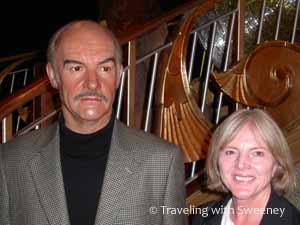 Nothing is what it seems ...

Do you think I should have a Prosecco or two when