I was going to avoid the pun, but just couldn’t help myself. Besides, it’s true — the trulli of Alberobello and the surrounding area in the Puglia region of Italy are unique. 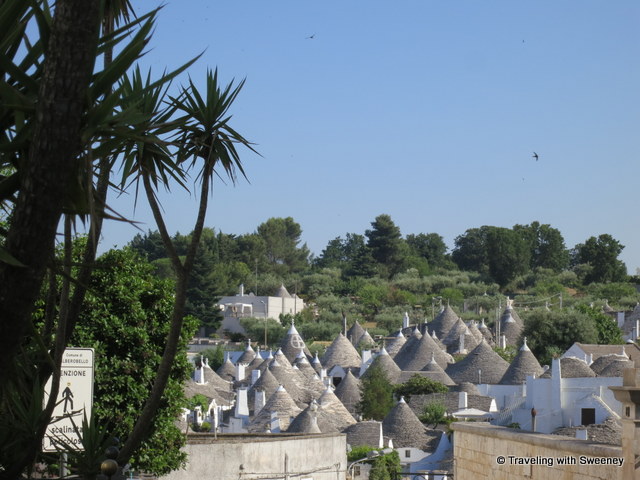 Cluster of trulli in Alberobello

I hadn’t seen (and I have to confess never heard of) trulli before doing some research for our trip to Puglia in June. The online information and photos were enticing and we decided Alberobello, where trulli are quite prolific, would be a must-see. But it wasn’t until we were actually there that I got to understand the special characteristics, symbolism, and surprises about them. 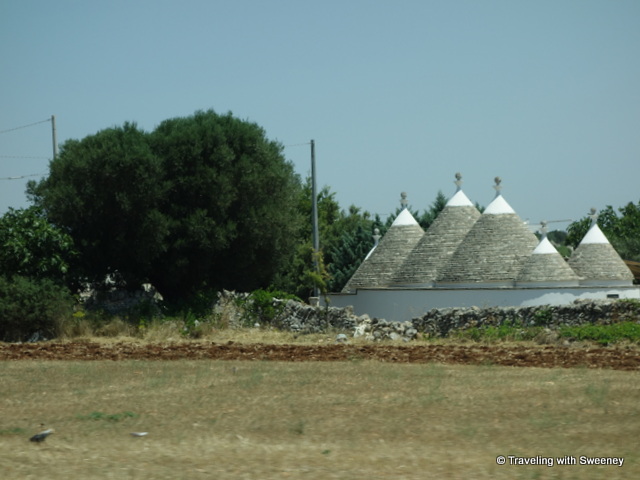 Trulli along the road in the Valle d”Itria

While driving through the Valle d’Itria to visit the white hilltop towns of Locorotondo, Cisternino and Martina Franca we had seen trulli, some of them very old, along the road. My first impression was that they were alluring — something out of a fairy tale, cozy like a hobbit hole. The fascinating stone buildings with conical roofs made of layered stones ( limestone) and topped at the peak by unusual symbols seemed everywhere. We couldn’t wait to explore them in Alberobello. 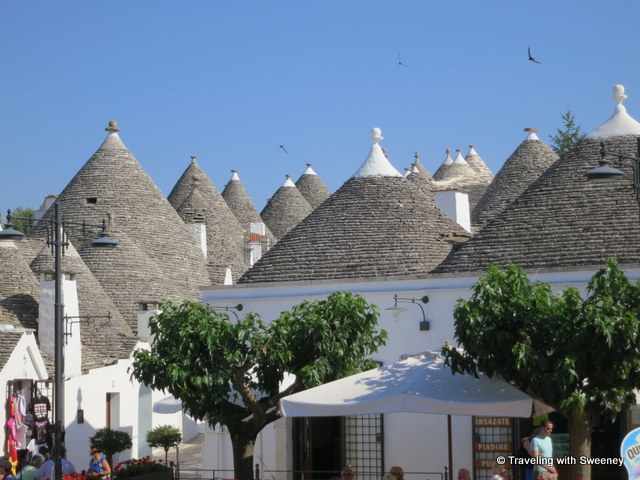 So what’s the deal? Why did this style of architecture become so dominant here? No one is completely sure though I liked the popular story which said that they originated during a high tax time and the trulli constructed of dry stone (i.e. no mortar) could be quickly disassembled when inspectors (of the King of Naples) were in the area. Certainly the geology of the area had a play with the availability of limestone. The design with double walls up to 2 meters thick also was extremely conducive for sheltering from the weather: waterproof, retaining heat in the winter, and repelling the heat in the summer. The design also accommodated the capture of rain water, diverted in channels to a cistern beneath the house. Trulli are also quite stable; long abandoned ones remain solidly intact.

They fascinated me. No mortar and yet they were waterproof, partly due to the limestone and double wall stone construction with gravel between them. The cone shapes were created by layering concentric circles of stone with gradually decreasing diameters, which is apparent viewing the conical roofs. By the way, the word trullo (singular form) is derived from the Greek trŷllos, meaning cupola.

Initially (in about the 16th century), trulli were stone huts with a single trullo for housing farm workers or livestock; these usually had a single circular room. In the mid-19th century, when wine making in the area flourished somewhat as a result of the French Wine Blight, farmers built their homes using the trulli design. These were typically multiple room structures with a square base which had multiple trulli with a room beneath each, usually a larger trullo over the center living area connected to bedrooms and a kitchen with a fireplace. 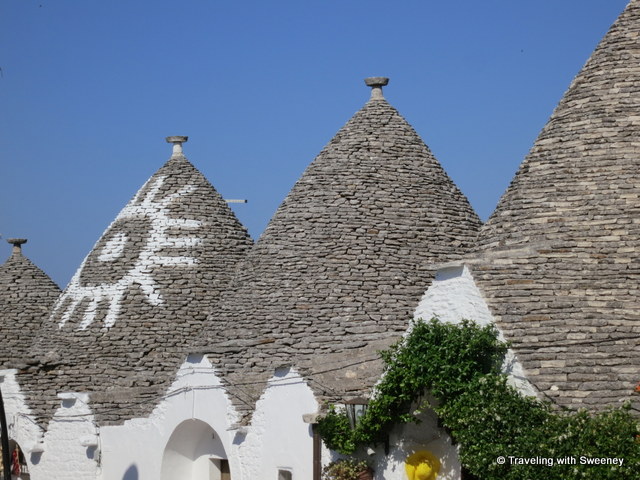 Also interesting were the large whitewashed symbols on the cone roofs. These are almost exclusively on the trulli of Alberobello; the custom of annually whitewashing the symbol at the same time whitewashing the complete interior and lower exterior, which disinfected due to the properties of the lime in the limestone. The symbols were typically religious in origin, either Catholic, such as a cross or chalice, or Jewish, such as a candelabrum. The pinnacle of the cone was adorned with a stone symbol, usually with more superstitious than religious origins, such as an orb, representing the sun; others shapes include stars, moons, disks and cones.

Alberobello which sits on hills overlooking Valle d’Itria has the greatest concentration of trulli in the region with over 1,500 in the village.  Founded in 1797, Alberobello, a community of about 11,000 people, was named a UNESCO world heritage site in 1996 for the trulli that represent many of the its buildings. We explored the two areas of Alberobello with most of the trulli, starting with Rione Monti located on the highest hill of Alberobello, which has over 1,000 trulli, most of which house shops and restaurants. 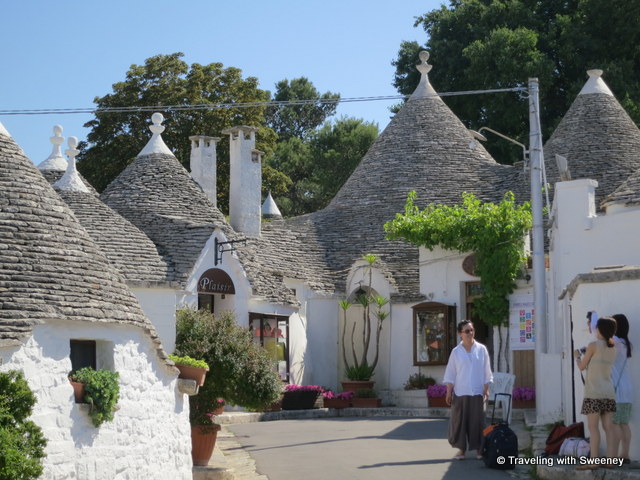 Shops in the trulli of Alberobello

We walked up the main steep limestone-cobbled street, Via Monti San Michele, winding past many shops and narrow, picturesque side streets. We looked inside a number of shops just to get a peek at how they had used the trullo structure interior or out of curiosity about the wares. 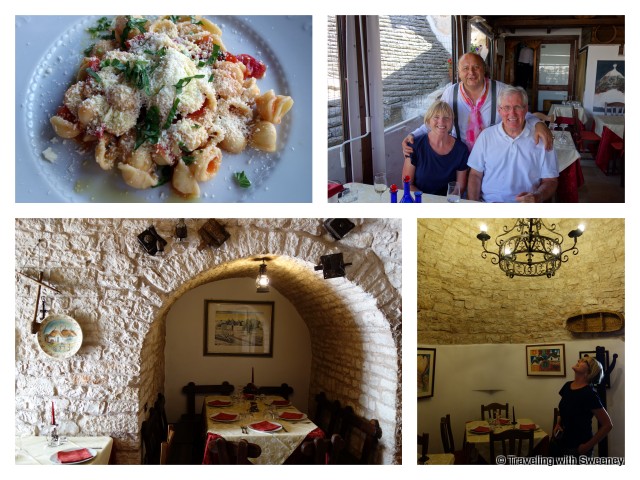 Our first stop was for lunch at L’Aratro where Domenico Laera, the owner personally took care us. He is a very colorful and charming character; we enjoyed his jocular exchanges in Italian with Carlo Romano, our resourceful guide and driver during our stay in Puglia. The food was fantastic (I think I had my favorite pasta dish in Puglia here) and the setting in a multiple trulli building made it a perfect place for lunch. But the friendly, amusing host and great service made this a place not to be missed when visiting Alberobello. Domenico was gracious in providing a brief tour of the rest of the spacious establishment after lunch. It gave us the ability to view the inside of a trullo at close range pictured above. The decor retained the character of the rustic trullo interior while highlighted and appointed with complementary furnishings and décor. 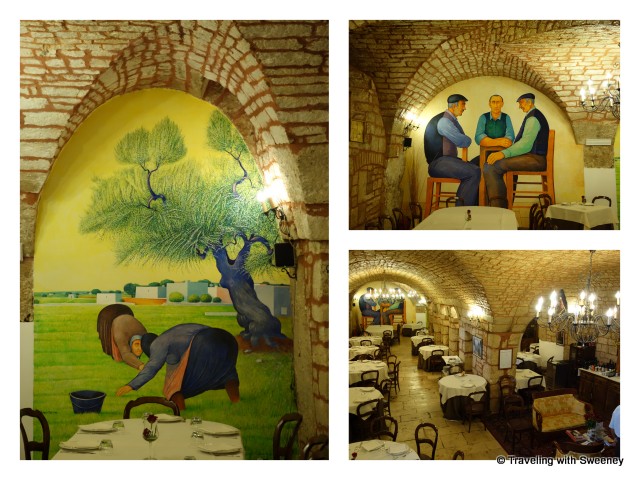 After leaving L’Aratro we stopped briefly at a nearby restaurant, Casa Nova. Carlo wanted us to see the interesting interior and to meet the owner, Ignazio Spinetti, whom we knew. Ignazio proudly showed us the unique design and decorations I particularly like the murals on the walls depicting scenes of traditional ways of life in Puglia. 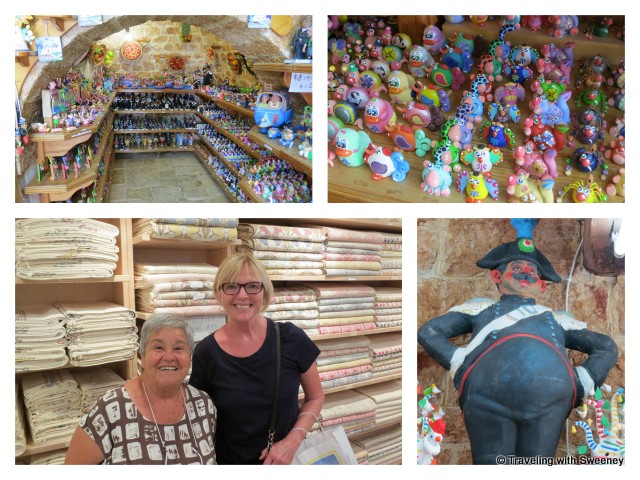 Nearby, on Via Monte Pertica Carlo took us to Matarrese, a Trulli-housed shop with two primary wares, beautifully hand embroidered linens and clay whistles. The latter were new to me; though we spent lots of time in Italy, almost none of it was shopping. There were hundreds on display in a very small show room. They were all made of clay and brightly painted. The sizes varied from a .7 meter tall figurine to very tiny figures. Each had a traditional whistle-type mouth piece and holes to vary the tones. The subjects varied from animals to fruits and vegetables to foods (real-size pizza) to famous caricatured figures (e.g. Barack Obama, the Pope, Alberto Benigni, and Silvio Berlusconi). The linens were beautiful and Sweeney purchased one as a gift for her niece’s newborn daughter, who was less than 5 hours old when we were in the shop. Carlo introduced us to the owner, Claudia Caporaso and her family. She was very hospitable and we were led to the rooftop of the shop to see amazing views of the trulli of Alberobello. 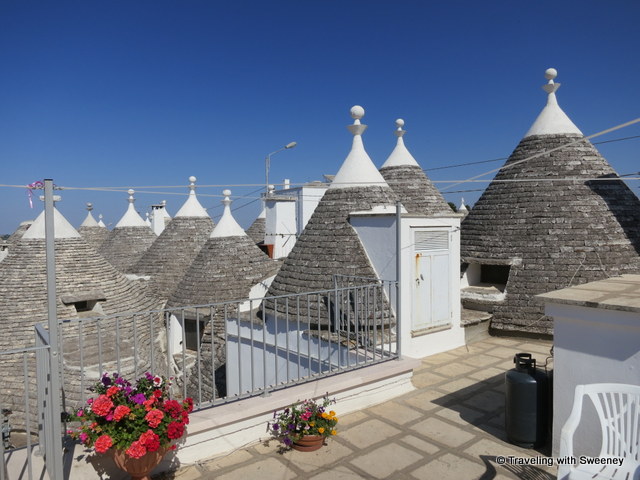 We continued up the street to the top of the hill and a trullo-style church, Church of St. Anthony of Padua, pictured inside and outside below. Our first impression was awe at the beauty and size but then it seemed the architectural style was quite fitting for a church. As we had come to learn, each church that we visited was surprisingly unique inside and it was interesting to guess the inside of this one from viewing the outside. 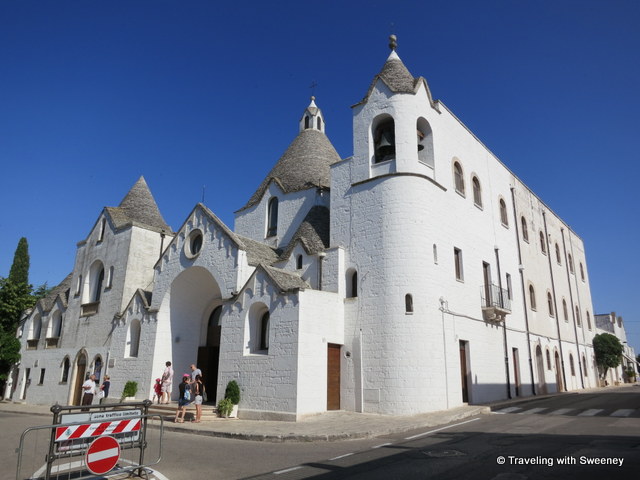 Church of St. Anthony of Padua. trullo-style atop Rione Monti 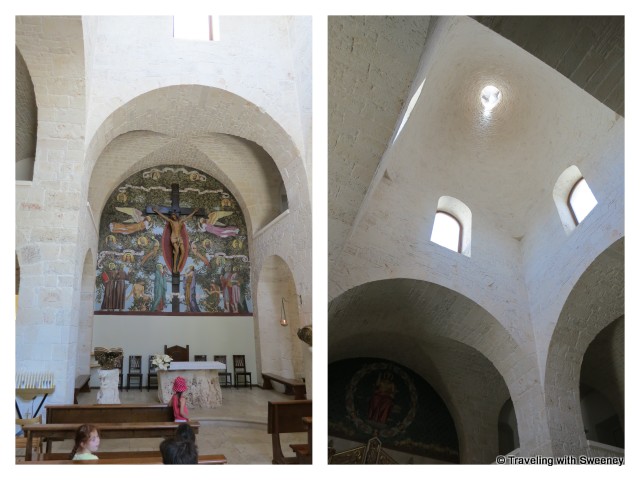 Church of St. Anthony of Padua

We traveled back down the hill and across to Alberobello’s second hill to a newer area of the city, Rione Aia Piccola which has 400 trulli, almost all residential. 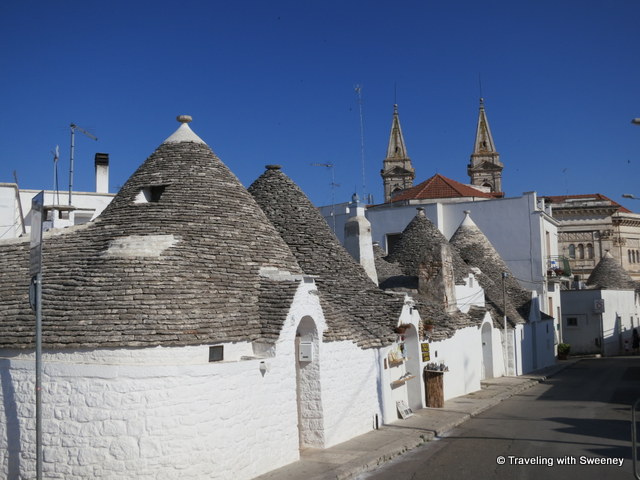 Away from the main tourist area of Alberobello, it was fairly quiet as we walked along the streets and briefly toured the Basilica before ending our visit in front of the Trullo Sovrano, a museum which was closed, but represented on the largest trullo structures and was also representative of the Alberobello multiple-room trulli. Inside, the museum provides a glimpse into what it had been like to live in a trullo-style home.

Sweeney in front of Trullo Sovrano

We haven’t seen or heard much of trulli anywhere else since our visit; however, we were told a similar style of architecture can be seen in other areas of the world, some much older. 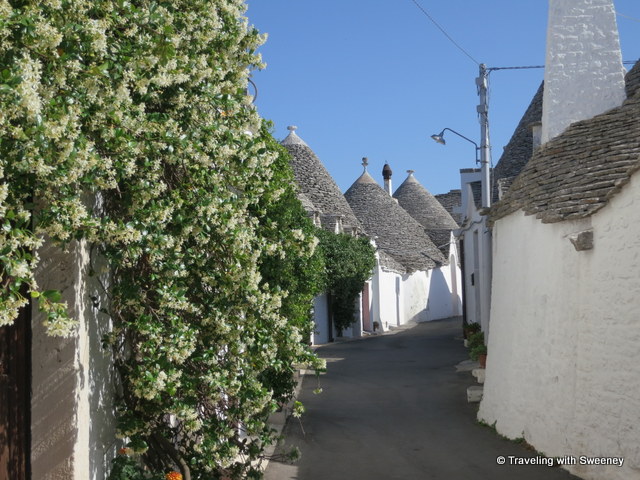 Side street of Rione Monti

Have you seen the trulli or similar buildings in your travels?

We’re contributing this post to Nancie McKinnon’s Budget Traveler’s Sandbox Travel Photo Thursday. Enjoy other links to photos and stories on her site, too.