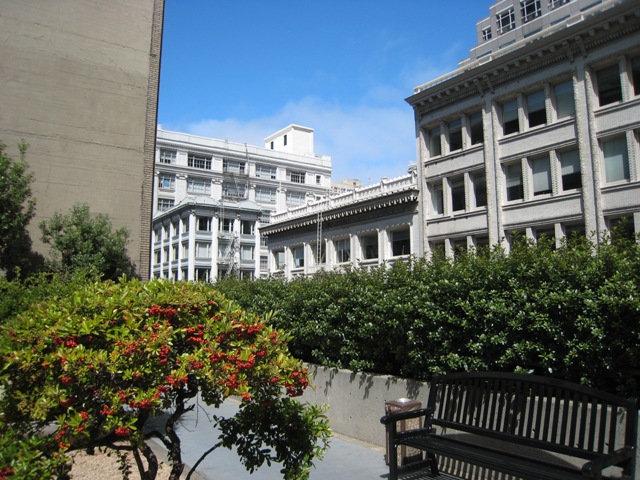 POPOS (Privately-owned Public Open Spaces) in San Francisco. Does your city have them?

On Rick Evans’ Architecture Walking Tour of San Francisco’s Financial District, there are many interesting aspects of the tour, not the least of which were four of the city’s POPOS (privately-owned public open spaces). Among the regulations in the “Downtown Plan” of 1985 is a requirement that private owners create and maintain areas such as gardens and terraces for public enjoyment. Largely unmarked and unadvertised, they are located at some of the most noteworthy buildings in the city.

Our group’s meeting point was the Galleria Park Hotel at 191 Sutter Street where Rick had us gather by the elevators to start the tour. It seemed like an unusual place to start an architecture tour, but we soon found out why. Our first stop was one of the POPOS, a rooftop garden next to the Crocker Galleria and accessed from the third floor of the hotel. 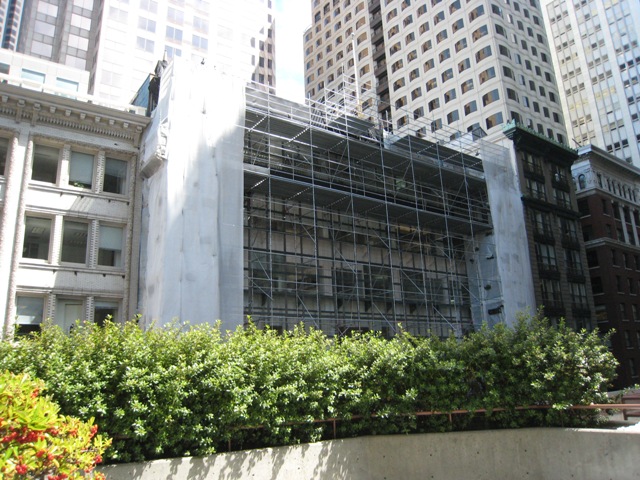 Visible from the rooftop directly across Sutter Street is an architecturally significant block in San Francisco. There, the Hallidie Building (currently obscured by scaffolding for inspection projects) and 3 others built between 1906 (post earthquake and fire) and 1917 are located. The Hallidie Building was the first in North America to have a glass curtain wall, which was a shocking change from the stone and brick construction of the time. It was designed by Willis Polk, the architect responsible for many of San Francisco’s notable structures. It seems fitting that the headquarters for the American Institute of Architects (AIA) are located there. 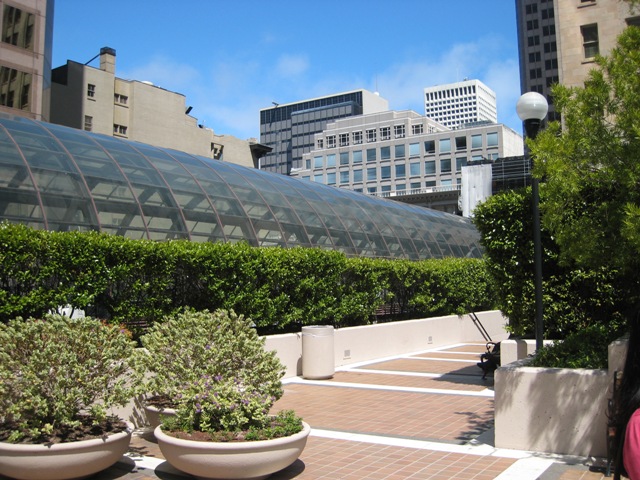 Rick then led us to a stairway into the glass-domed Crocker Galleria where there are many shops and cafés on three levels. There is actually a second urban garden on the other side of the Crocker Galleria on the roof of Wells Fargo’s flagship bank. Had Rick not been leading the way, I would never have found it. It’s a lovely spot where a few workers were having lunch, but it seems to be another well-kept secret POPOS.

From here, we could see the landmark Hobart Building designed in Renaissance and Baroque style by Willis Polk and completed in 1914. The plain, flat wall was exposed when a building next to it was demolished. 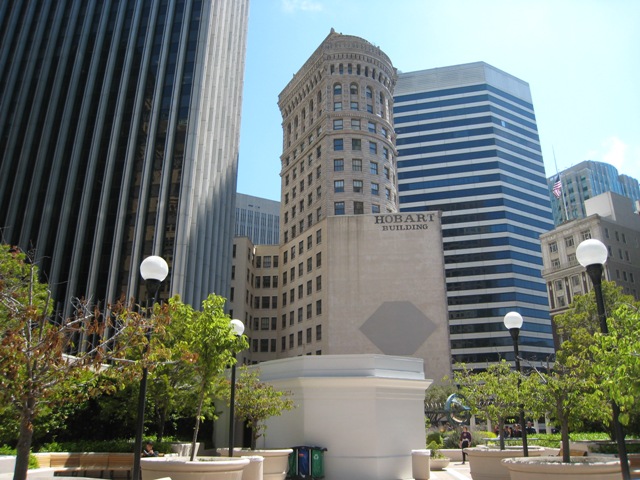 Also visible from the garden is the imposing 111 Sutter Street office building, completed in 1926. It was designed in French Romanesque style by the same architects who designed the Waldorf-Astoria Hotel in New York. Rick pointed out the similarities. 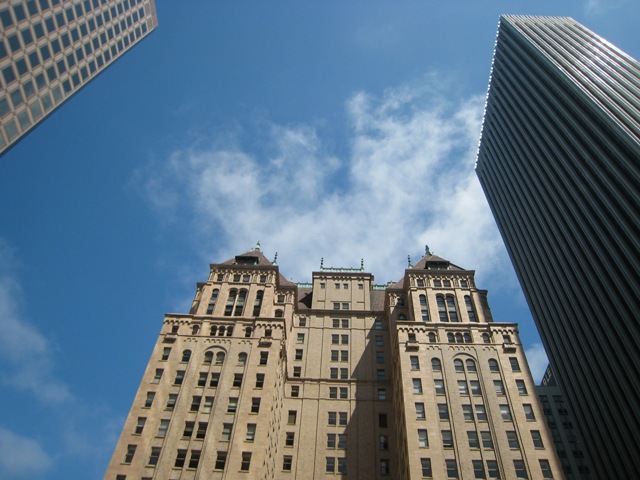 Citigroup Center has a more welcoming and visible public space on its main level at the corner of Sansome and Sutter. It’s glass roof, palm trees, fountain, sitting areas and a crêperie make it a pleasant spot to relax or have lunch. But if I had just been passing by, I may not have noticed or thought that it was open to the public. 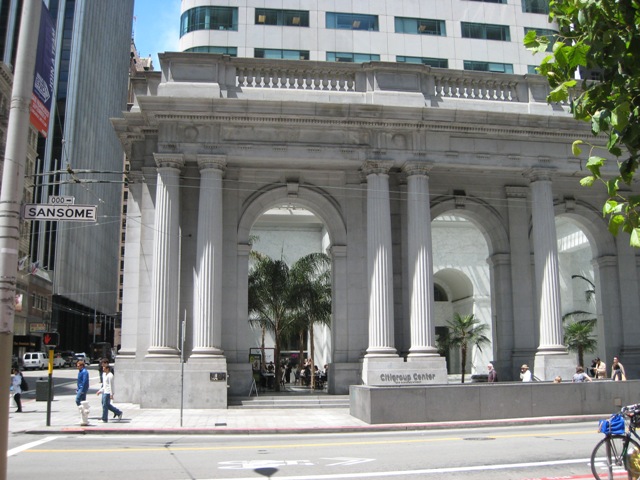 The last of the POPOS that we visited was at One Bush Street, once the headquarters of Crown-Zellerbach Paper Company. Completed in 1959, it was the first high-rise built in the city after World War II. The glass office tower with an open “jewel box” lobby and mosaic tile elevator column was designed by Skidmore, Owings, and Merrill. 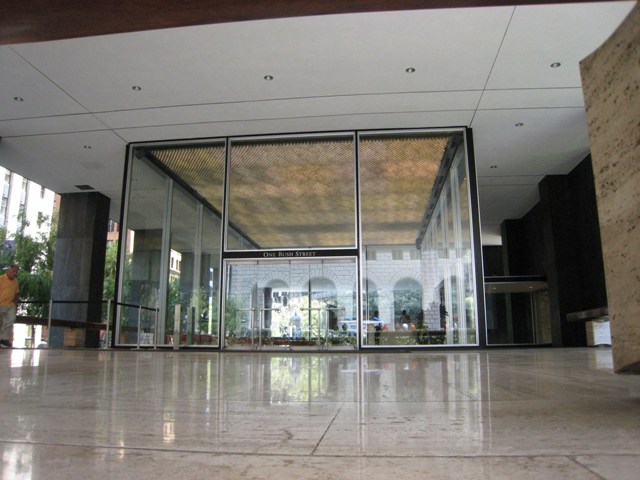 Below street level without an obvious entrance and a moat-like design, this POPOS may deter most passersby. There’s no seating provided, but a few people sat on the concrete and river rock covered ground to eat their lunches. People do like to sit along the walls on Sansome Street above the garden. 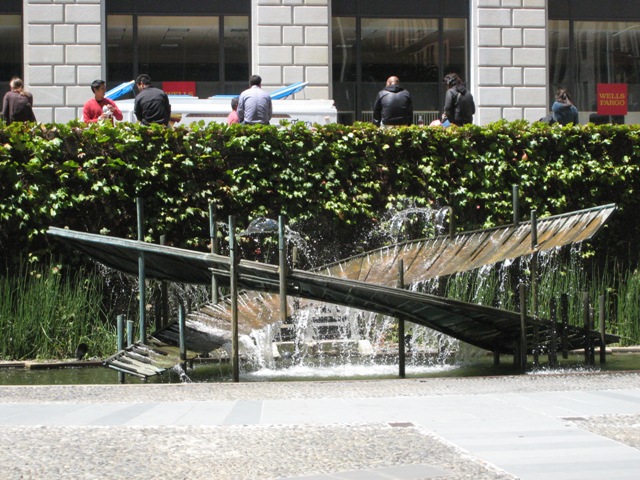 Another view from One Bush Street is of this narrow (20 feet wide) building. Unfortunately, the future of this 1910 gem is currently undecided as it does not have protected status. To the right is the art deco Shell Building which was dedicated on October 1, 1929 just before the Great Depression. 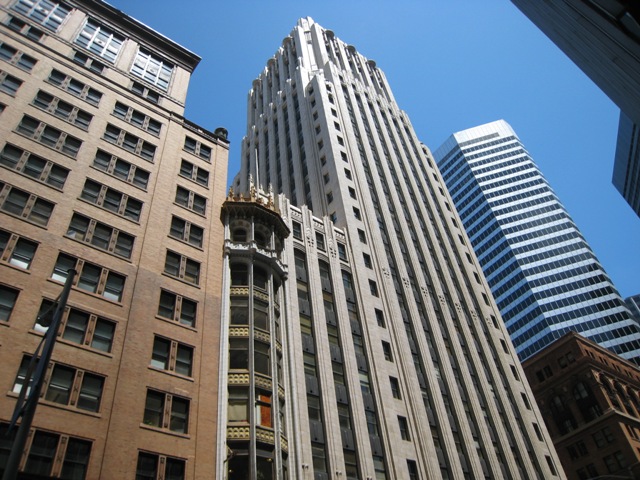 There were no further building developments downtown until the construction of the Zellerbach building directly across the street in 1959. 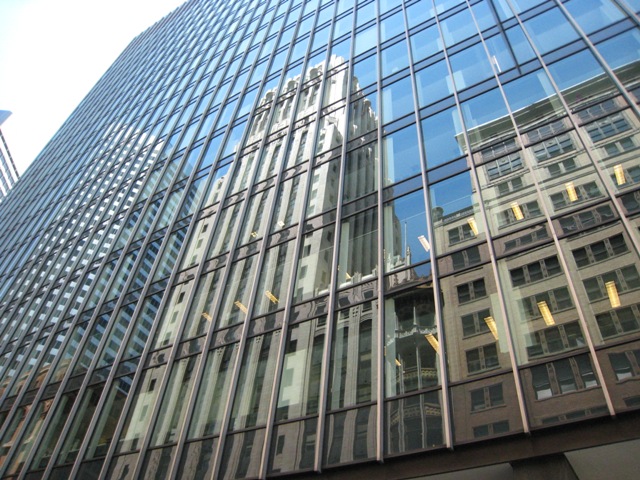 I couldn’t resist taking a photo of the reflection of the Shell Building in the glass Zellerbach tower.

I’ll be following up about other architectural highlights — past, present and future — in upcoming posts.

37 thoughts on “Views from POPOS”